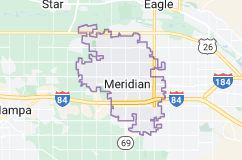 Meridian is a city located in Ada County in the U.S. state of Idaho. As of the 2010 census, the population of Meridian was 75,092 making it the third largest city in Idaho after Boise and Nampa. Meridian is considered the state’s fastest-growing city and among the fastest-growing cities in the United States.